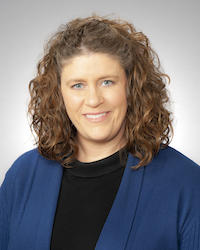 Lisa Sheehan, MSN, RN, VA-BC is a programmatic nurse specialist with the Quality Education and Program Development Department at the Wolff Center at UPMC. She received her nursing diploma from The Washington Hospital School of Nursing, where she began her nursing career as a nurse intern, a graduate nurse, and then a registered nurse on an ICU step-down, post-surgical unit. She also worked for a physician-owned surgical hospital per diem for four years in orthopedics.

Lisa began her career with UPMC in 2011 at UPMC Shadyside as a member of the Vascular Access Team, where she also discovered her passion for Quality Improvement and Patient Safety. It was during this time that she pursued her Bachelor of Science in Nursing then completed her Master of Science in Nursing degree with a focus in nursing education in 2015 at Robert Morris University. Lisa worked at UPMC Children’s Hospital of Pittsburgh as a Programmatic Nurse Specialist, Vascular Access Service prior to her current role as a Programmatic Nurse Specialist at the Wolff Center at UPMC, where she initiated a collaborative hospital-wide effort to assess the current state of central line care within the facility that led to a re-education of nursing staff to improve patient outcomes. During her years with UPMC, she was also instrumental in organizing system representatives of the vascular access community to work toward unifying practice and producing measurable outcomes.

Lisa has presented locally on IV Extravasation Treatment and nationally with both a poster on extended-dwell catheter use in the pediatric population and speaking about CLABSI reduction efforts at UPMC Children’s Hospital of Pittsburgh. She is currently serving The Association for Vascular Access in a national capacity on their annual scientific meeting design team pediatric executive board representative. Lisa also served as adjunct clinical faculty at Carlow University for junior-level medical-surgical nursing students for four and one half years.